With its fossils, well-exposed rocks and proximity to Seweweekspoort, Zandrivier Farm is geologically very interesting. It is one of the highest farms in the Western Cape and is 115 km from the sea, so how did marine shell fossils end up in its rocks. To answer that, we have to go back 510 million years.

That was when deposition of sediments of the Cape Supergroup began. At the time the area which is now Zandrivier lay in a shallow southern ocean called the Agulhas Sea, the coast of southern Africa lying to the north. For about 170 million years, tons of mud and sand were deposited, transported from the southern African hinterland by large river systems to the sea. Life existed in this ocean in the form of invertebrates (soft bodied animals, some with shells) living on the sea-floor. Along with the sedimentation these sea animals were buried and preserved, and the sediments were compacted under their own weight, eventually forming rock. The Zandrivier shell fossils are called brachiopods (lamp shells – see photo below) which were filter feeders attached to the sea floor. The largest shell in the photo below, which looks like a swallow with spread wings, belongs to the order Spiriferida which is now extinct.​ 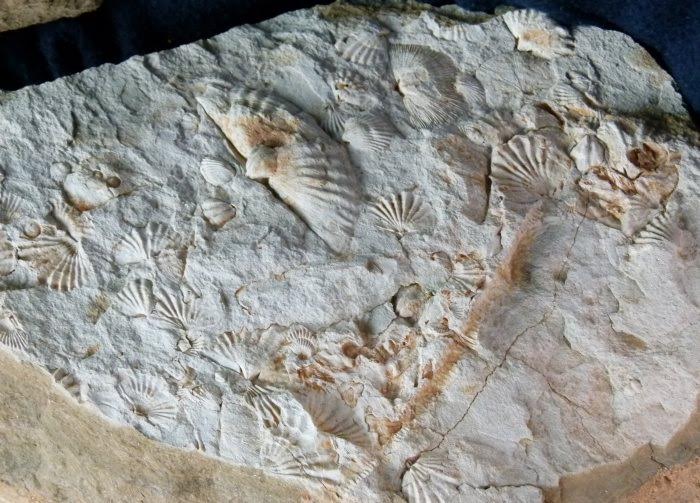 Zandrivier brachiopod fossils
Other fossils found at Zandrivier are crinoids, also called feather stars or sea lilies due to their long stem and flower-like arms but they are in fact animals. They are related to sea-urchins and starfish and are also filter feeders. In the photo below left, the jointed sections are crinoid stems made from disc-shaped pieces of endoskeleton while the round indents are fossil discs from the stems. On the right are drawings of what the whole animal looked like.
At around 330 million years ago the Agulhas Sea began to close as the continents of Antarctica and South America moved in to form Gondwanaland. The Cape rocks with their included fossils were now crumpled and uplifted to form the mountains you see around Zandrivier. These form part of the Cape Fold Belt , an approximately 1000 km long coastal belt of deformed and folded sedimentary rocks, extending from north of Cape Town (Cedarberg) to beyond Port Elizabeth. The diagrams below show the formation of the Belt. 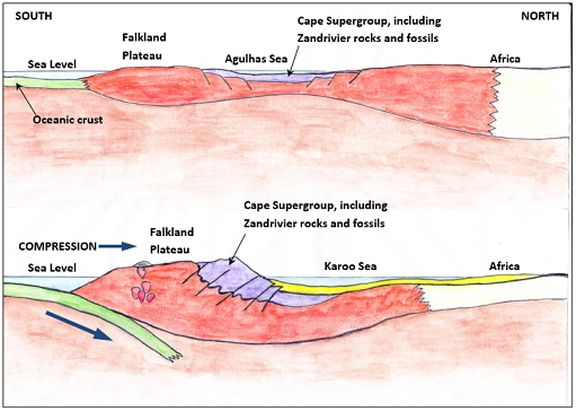 Formation of the Cape Fold Belt drawn by Lorraine Thiel, after Mc Carthy and Rubidge
The deformed and folded rocks that you can see whilst driving through Seweweekspoort are some of the best examples of intensely folded rocks of the Belt.

The main compressional force came from the south resulting in the roughly east-west trend of the mountain chain. This can be seen in the image below which shows a section of the Cape Fold Belt with the Zandrivier homestead in the centre. To the south one can see the hard, light coloured sandstone and quartzites of the Table Mountain Group with Seweweekspoort cutting through it. These erosion-resistant rocks form the most dramatic folding and therefore some of the highest mountains, like the Swartberg, in the Belt. To the north lies a band of darker, softer Bokkeveld shales and siltstones. Erosion of these rocks has created flatter areas as well as fertile soils suitable for cultivation and thus many farms of the Klein Karoo occur on Bokkeveld rocks. Because they are finer grained and less deformed, they contain most of the fossils found in the Cape as well as those on Zandrivier. To the north (in the left hand corner of the photo) further light-coloured quartz sandstones of the Witteberg group can be seen. These are also hard, erosion resistant rocks and form the mountains that you see to the North from the Zandrivier cottages. 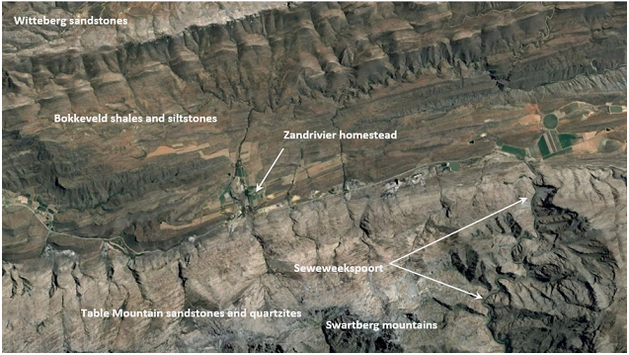